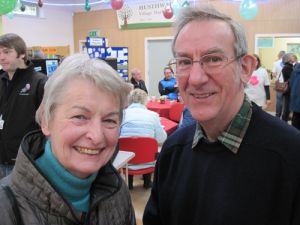 The news of the sudden death of Simon Earley at such a young age, came as a shock to the entire village and in a packed Methodist Chapel on the 4th April, his life was remembered at a most moving Service of Thanksgiving.

Simon and Jackie were married in 1982 and moved to Victoria Cottage in Husthwaite in 1998. They had been to North Yorkshire on holiday many times and decided that this is where they wanted to settle down. Simon could often be seen walking his black labrador, Barney down the High Street and into the fields. A quiet unassumimg man and with a dry sense of humour, he and Jackie were quickly welcomed into the life of the village and became much involved with the running of the Chapel where he was Property Steward. Simon also worked at the Post Office in Easingwold for about five years, where he made many friends.

As a youth, Simon was an enthusiastic member of the scouting movement; starting off at a very young age as a cub and rising through the ranks to become a scout leader.and quartermaster. His other interests included model railway building and vintage public transport. He also became involved in the construction of the Seaton miniature tramway in Devon, laying track and putting up overhead wires.

We will all miss that familiar figure of Simon walking Barney down the High Street, but none will miss him more so than Jackie to whom we extend our very deepest love and sympathy.