Andrew Thornton: Out in All Weathers 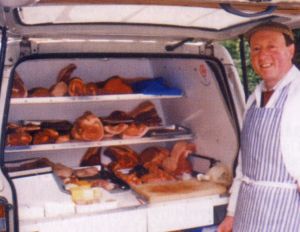 To keep his meat fresh John Thornton packed it in a wire-meshed frame and hoisted it into a pear tree. A butcher in the 1940s, he delivered door to door in his neighbouring North Yorkshire villages.

Half a supermarket century later this family service was kept kept going until this week by John's son, Andrew. His van is a familiar sight in the villages round Husthwaite.

John Thornton worked at the butcher's shop when he was demobbed in 1945. Later, he bought the business.

As a schoolboy, Andrew already worked with his father. They ran a pig-slaughtering service. ‘Farmers had boiling water waiting for us when we arrived with the van and trailer, the scalding tub and the scrapers. They dry-cured the meat and hung it on ceiling hooks. Sometimes we helped with the salting and cutting.'

From school at 15 Andrew joined the family business. ‘I cut meat and made sausage. As soon as I could drive I took over one of the delivery vans.'

A door-to-door delivery service of this kind is a link to the rural past. In her book, ‘The Happy Highways' local historian Joan Hartley introduces the travelling salesmen of Upper Eskdale after the First World War. Archie Alexander walked out from Peacocks' shop at Castleton round the farms of Westerdale and Danbydale. Fascinated, the children beat out their rhythm as he recited his list of commodities: ‘blue, blacking, blacklead, matches, candles, cheese, bacon, ham and taty.'

Mr Fletcher, a Whitby draper, carried his samples in cases or oil cloths and methodically unfolded and displayed each item before replacing them for perusal by the next customer. People bought aprons, dresses, underwear, socks and towels. A butcher who came weekly from Castleton gave the children a penny when he was paid, so they usually "happened to be around". Mr Gladders came from Saltburn each week to collect any butter and eggs, rabbits or dressed poultry, and women relied on this income for paying their grocery bills.

‘Sometimes,' said Andrew Thornton, ‘people say I have comfortable little job. OK, but remember it's to be done in all weathers. I haven't had a holiday since 1986.' Andrew's refrigerated van, with its up-and-over door, is better than when he and his father stood out in the weather to serve.

‘My father had a lad in each village. He would pick him up after school, and the lad would run ahead, knocking on the doors and getting the orders.'

This was a cunning response to one of the job's frustrations. ‘An old lady says what she wants. I take it to her and she asks for something else. I ask if she's sure that's all. When I get back she's had another idea, and I'm up and down that drive again.'

People often left a basket in their porch, with a note of their order. This is common among older people, who prefer not to open their doors after dark. Andrew liked the arrangement. It was in keeping with the countryside traditions of his family business, giving people the same one-to-one service as their parents had from his father.

No supermarket could compete.

published in ‘Down Your Way'