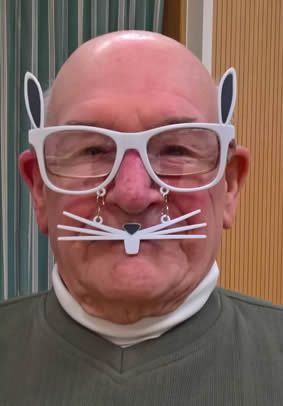 These are busy days for Primetime. We began a little more than a year ago with 6 or 7 members. This week we went on our travels to a new venue, a hall at Great Ayton, one of the most recent communities to join the scheme. Although we had three apologies we nevertheless took along a strong unit of 14 players.

These away games are always enjoyable - the opportunity to meet new people, to share experiences and to learn from each other. The Great Ayton story is especially interesting because the hall we visited is fighting a threat of closure. We knew exactly how they felt! And we were able to give them strong encouragement and a hope of survival into better days.

Recently Husthwaite's Primetime was boosted by a grant of £2000 from the Two Ridings Community Foundation - North Yorkshire Reward Fund.

"Thanks to Debbie Lewis-Green for homing in on these people and guiding our application," says Primetime's coordinator, Robin Walton. "As a result we can pay our paralympic coach, Chloe Hunt, for another year and that's a great relief because she is an inspiration to us all and an example to other Primetime groups."

Robin is also leading Primetime's ambition to reach out to other local communities. "We've built our membership strongly now," she says, " but we want to offer opportunities to people in other villages. I'm especially interested in developing our relationship with Springhill Court. The new grant will allow us to negotiate a taxi contract to bring people into Husthwaite."

Recently there was an especially exciting Primetime session when we were visited by Sport Coach UK. They are running a nationwide project to study coaching at every level across all sports. Our visitor was no less than an international netball player, Stacey Francis, who has 50 caps for England and a World Cup Bronze Medal.

"Stacey arrived expecting to do a morning's paperwork," says Robin. "She was delighted to put that aside and join in with the Primetime games. Obviously, she was brilliant and very competitive, but our village neighbours gave her a run for her money."

Stacey Francis reported on her Husthwaite Village Hall Primetime experience in the weekly article she writes for the Yorkshire Evening Post in her capacity as captain of Yorkshire Jets netball team.
‘Having recently lost my nan,' she wrote, ‘it made me sad to think of how she could have benefited both from the physical and mental stimulation of a group like this one. I felt both extremely welcome and a part of their family by the end of the session.'

From an international sportswoman in her prime that was a tribute to Primetime that we all feel proud of.