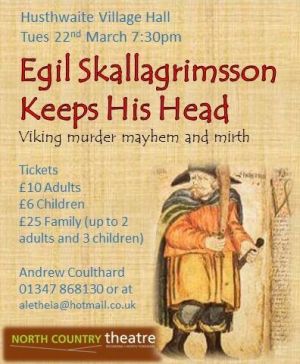 North Country Theatre are celebrating 20 years of bringing really good theatre to villages all over our region. Nobby Dimon (pictured) who created the company says "We decided to bring back one of our most popular productions for a short tour. It's part of a whole year of marking our anniversary."

A storm drives Egil and his Viking crew up the Humber and into the arms of his old enemy Erik Bloodaxe. Curtains for the Icelandic hero? Possibly, but Egil has more strings to his bow...and his harp...than first appear.

Just for interest...there really was an Egil Skallagrimsson, a Viking age poet, warrior and farmer.... and he did write a famous saga round about 1000AD. That's him in the picture.....