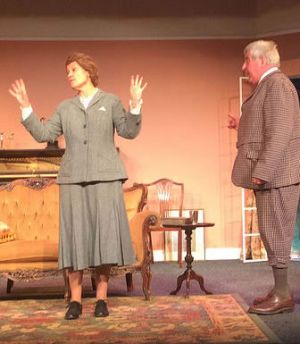 What is the difference between Am-Dram and the professional theatre? Sometimes, not

as big as you may think.

Last week I went to see ‘The Importance of Being Earnest' at the Grand Opera House.

The original Wilde play had been adapted to suit the fact that Nigel Havers and Martin Jarvis are about 40 years too old for the original Wilde characters. This conceit along with an unfunny running gag about missing cucumber sandwiches took the edge off the first half

The seconded half was better and raised more laughs. The actors were excellent, Nigel Havers and Sian Philips especially.
The general consensus amongst my friends was ‘brilliant'. I thought less so.

Wondering if I missed the point I looked up a few reviews.  Newspaper reviews ranged from good to awful.

So, for the second theatre visit this week, I went to see David Goodwin's production of John Chapman's  ‘Oh Clarence!' at the Galtres Centre Easingwold.

It was superb! I shall look at the actors in a minute but firstly deal with more mundane matters. Living in Yorkshire for 50 years I have absorbed the concept of value for money thoroughly.
Earnest £32, Clarence £8. This would reflect production costs not value.
In addition, Galtres has an excellent ambience underpinned by friendly volunteers, raked seating and cheap beer. Actually the beer is piped John Smith's and so-so, but it is cheap.

I have included a description of the play as a footnote below as the plot, in the true tradition of English Farce, mattered not a jot.

What good farce does need is pace. The characters delivered their lines crisply and synchronized complicated movements around the stage and in and out of multiple doors.

The comic timing was sharp and the audience bypassed tittering through to raucous laughter as cups were dropped and caught and tables smashed. The classic bedroom farce scene was worth the admission money alone.

David Pike as Lord Emsworth brilliantly captured the vagueness and bewilderment of an aristocrat whose understanding of the world is confined to his prize pig. He cleverly resisted what would have been an easy move into panto mode with a subtle performance.

The Honourable Freddie played by John Hawker was a real delight. An audience favourite as soon as he opened his mouth, some cutting lines indicated that the foppish character was not as stupid as he looked.

It is no coincidence that Simon Stephens has been in most of the best plays staged by EP and this one is no different. Younger that the character he played, he delivered a nuanced performance. When he was ill, he was so convincing I was more than slightly concerned for him.

It would seem that Chapman had Bromwyn Jennison in mind for the part of Lady Constance. Her elegance and barely suppressed irritation with Lord Emsworth as she tried to make sense out of nonsense was a strong element to the play.

What can I say about Mary Hill as Dame Daphne? Spousal duties suggest I should be flattering. It takes no effort, however, to state that her skills enabled her to portray a comedic man-eater so consummately. She was formidable. No more to be said.

As someone who auditioned for the part of Beach...and failed! it is through slightly gritted teeth that I have to say how well Mick Scott played the part. He managed to be superficially subservient whilst a raised eyebrow or tone of voice indicated otherwise.

As in all farce there is someone who is not who he says. James Potter as the Rev. Rupert Bingham admirably played that part. That he and the set were in one piece at the end of the run was down more to luck than anything else.

Gertrude Willerby, played by Amelia Gillen, looked every bit the part of an attractive young ‘thing'. No wonder the Rev Rupert nearly fainted when invited to a nighttime assignation in her bedroom. Her emotional range, from wailing to ecstatic, was finely managed.

Freddie's fiancée, Katie Turner as Jennifer Parsloe Parsloe, strode the stage like acolossus, literally. Legs akimbo with the faint whiff of horse she shook hands with men until their eyes watered. Age was no barrier as Dr. Chalfont bit the dust.

As to Dr. Chalfont, played by the ever-present Brian Goodyear, he proved an excellent foil to the chicanery of Dr. Simmonds. As the fake doctor but real detective, John Drew managed what is a difficult role well as he scoured Blandings for the lost scarab.

Austen the maid flitted in and out as amused as we were at the whole proceedings. Eleanor Wilson followed her good work in ‘Alice' in this part.

Richard Wood, who does a great deal behind the scenes at Easingwold Players, tied up proceedings with his brilliant enactment of Sergeant Evans. Rarely in the history of theatrical endevour, have no lines been delivered with such aplomb.

For any play you firstly need a venue, then a production team and finally the actors. Having some experience of what goes on backstage I was aware of how much credit should be delivered there. They provided the perfect vehicle for the cast to perform on and in.

It is only when you watch a rehearsal that you really understand what a director offers. Davis Goodwin had good ingredients to start with but his witty, intelligent and energetic input underpinned this terrific show and lent credibility to the comparisons I made at the start. His was an enormously impressive performance.

The answer to the intial question? This production was only amateur because no one was paid. In every other sense...

This comedy based on one of P.G. Wodehouse's most famous characters, Lord Emsworth, the dreamy peer of Blandings Castle. The delightful Earl, as vague as ever, wants nothing more than to be allowed to potter around Blandings, tending his roses and prize pig, the Empress.

His sister, Lady Constance, has other ideas and arranges a house party into which bursts Dame Daphne Winkworth, whom the Earl is urged, much against his will, to marry. He is further plagued by his vacuous son Freddie Threepwood, Rupert Bingham, a clumsy love-lorn curate and his arch enemy Sir Gregory Parsloe-Parsloe, from whom Lord Emsworth unwittingly steals a priceless Egyptian scarab.