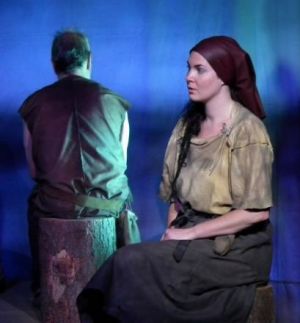 North Country Theatre are passionate about bringing really good theatre to unusual places. In the 20 years since they started, they've taken some stunning productions all over the North.
We first met them when they brought a whole covered wagon on stage in "Home On The Range". We were left amazed by their inventiveness and imagination. It was an unforgettable telling of a wonderful tale, of Yorkshire women surviving in 19th C America. Since then, they've repaid our enthusiasm for what they do, many times over.
So Gift Of Stones was their latest play, an ambitious dramatisation of a Jim Crace novel, about the challenges faced by people when change sweeps through. It was set in prehistory, but could have been any period. North Country brought a different, much simpler set this time. Previously the set has almost been a character itself. This time, more depended on atmospheric lighting and music. For them and us, it was an adventurous challenge, an experiment in doing things differently.
I asked as many people as I could, days after the event, to tell me about the play and how it went for them. Most people replied and the results are fascinating. Many spoke about the quality of acting. People love the professionalism of the company and admire their skill. They talked about being engrossed, about being able to hear a pin drop.......about the strength of individual's presence on the stage carrying you along. Praise too for the stuff you don't notice...the quality of the sound and the lighting and the atmosphere it creates.
The play itself was more challenging. Words like ambitious and bold, courage and unusual all came up. You get the sense that it wasn't as easy to get into as some of their earlier work but repaid the effort. Praise too for the quality of the writing by Nobby Dimon the company leader. Someone in another venue said that it was beautiful language, beautifully spoken.
The impression comes through that people love the company, were swept up in the evening and feel real warmth for the quality of what they do......but like the comedies more. One said how fantastic it was to see good live theatre near home. Most said that they would be back for the next play.
One afterthought....many said how much they really like our new hall as a place to see theatre....but don't much like the seats! Andrew Coulthard