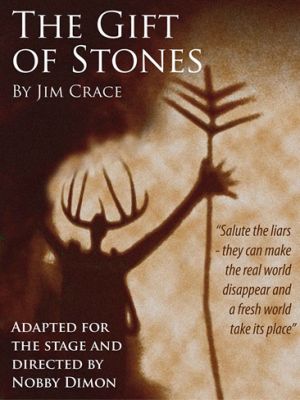 "The fabulous North Country Theatre Company return with their latest production, Gift of Stones by Jim Crace. Adapted for the stage and directed by Nobby Dimon.

The village of flint knappers is safe, self satisfied, and inward looking, but a stray arrow, an amputation, and a wild woman from the salt sea marshes bring murder, mystery and cataclysmic change.

Narrated by a one-armed story teller and his daughter, in a language as pared down and flinty as their tools and weapons, Jim Crace's award-winning historical novel is brought to the stage by the company whose brilliant adaptations have ranged from the hilarious 39 Steps to the scary The Rocking Horse Winner, and most recently the deeply moving A Month in the Country.

Look out for posters advertising this popular company appearing with this production at Husthwaite Village Hall and book your tickets as soon as you see the notices!

The performance will be on October 30th for one night only.