Jazz on a summer's evening 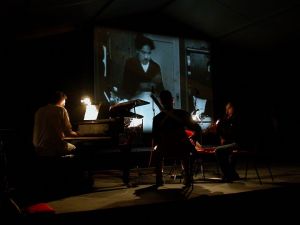 We didn't really know what we were going to get. If you had been to the Comic Opera for Children which the trio did here, earlier in the year, you knew that they would be brilliant musicians. And that there would be surprises.

It turned out to be an extraordinary evening.

Katie Foster plays the violin, has just finished studies at the Royal Northern College of Music and was in two national youth orchestras as well as leading the Edinburgh one. She is an immensely talented classical violinist but also, as she showed, she's equally happy with jazz and folk.

Ben Newton (on the piano) is a successful composer, was the BBC Young Composer of the Year in 2005 and now is a musical director in the theatre, including working with Hull Truck Theatre Company. We knew from the comic opera they did before that he is at home in any musical genre.
Pietro Lusvardi, the leader, was born in Lugano, the Italian-speaking bit of Switzerland, and has worked with orchestras in many parts of Europe and the USA. His main instrument is the double bass which he plays beautifully, in the conventional way, and sometimes like a percussion instrument. Every inch an Italian speaker, he told us not to be fooled and that he was really Peter Rush from Rotheram. He teaches now at Ampleforth College.

It's difficult to give a flavour of the music they played. There were sonatas by Vivaldi and Corelli that made you want much more of the same. But they were followed by tangos by Piazzolla that created an atmosphere of a dance hall in Buenos Aires. Pietro is a composer and wrote a prize winning piece to accompany "Gold Rush" the 1930's Charlie Chaplin silent film. They did that for us and it was stunning. There were standards too. My favourite was "Fly Me To The Moon".
The surprise at the end was that Pietro invited two guests from the audience up onto the stage. First was Oliver Pickstone (who had organised the whole event) and who plays jazz on the saxophone brilliantly and joined in with the trio. Later they were joined by Elliot Stewart on the guitar, at the beginning of his musical career and obviously very talented.

We didn't know what to expect but the outcome was an unforgettable evening of the best music; an extraordinary mix of styles from different periods and all played magically well. You could tell from how the audience reacted that they loved it, right to the end.
Congratulations to Oliver for thinking of the event and making it happen. Thanks again to Mike Wells for good sound and to everyone who helped to make it work.

There's talk now that they may come back to do a programme of Gershwin and Cole Porter. That would be good.