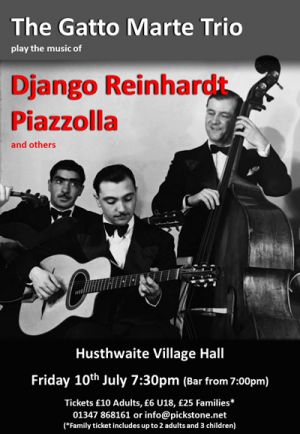 Following their performance of the comic opera for children "Colombo Tutto Tondo" for Husthwaite Primary School and the Orchard Village Club, the Gatto Marte Trio, led by acoustic bass player Pietro Lusvardi, return to Husthwaite Village Hall on Friday 10th July for an evening of music by the great gypsy jazz guitarist Django Reinhardt, the Brazillian tango-inspired composer Astor Piazzolla, plus some of their own compositions and one or two classical items.

Pietro was born in Lugano, Switzerland, and has played with professional classical orchestras in the USA and Europe, and has played jazz at festivals in Portugal, Italy and elsewhere. He also composes music for silent films and won the 1st prize for best music composed and performed live for silent film at the Harlock International Festival in Bolzano.

Pianist and highly talented multi-instrumentalist Ben Newton was the BBC/Guardian Young Composer of the Year in 2005 when he had his winning composition performed at the BBC Proms. In addition to working as a professional composer and arranger he also works as a Musical Director in the theatre, frequently working with, amongst others, the Hull Truck Theatre Company and the Northern Academy of Performing Arts.

Katie Foster has just completed her studies at the Royal Northern College of Music. She was previously the Leader of the Edinburgh Youth Orchestra and a member of the National Children's Orchestra of Great Britain and the National Youth Orchestra of Scotland. Katie's musical interests extend to jazz and folk music - in addition to playing with Gatto Marte she has also performed in the Celtic Connections festival in Glasgow as part of folk fusion band 'Kilairum'.