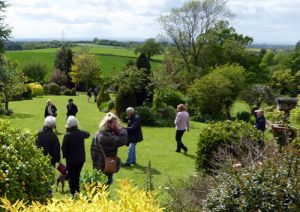 Looking out of the bathroom window at 7 o'clock in the morning, the early morning sunlight streaming in gave the promise of a perfect day. Unfortunately, this was Saturday, whereas the weather forecast for Sunday, the day of Husthwaite's first Open Gardens for several years, was simply expressed by weather forecasters as "wet and windy". The same view 24 hours later did more than justice to the forecast. There was a dense mist with horizontal driving rain.
By definition an open gardens event is an outdoor activity and this was not a good start to the day. It was still raining at 10 o'clock, but eventually the rain stopped and the overcast skies slowly (very slowly) brightened. By 3 o'clock the sun was shining and the crowds started to arrive from far and wide.
One couple from Hartlepool had Googled "Open Gardens" and Husthwaite had come up as the first link so they drove the 46 miles to see what the village had to offer. Many had seen the advertisements in the press or heard an announcement on local radio, decided to finish lunch and then visit as the weather improved. Yet more spotted the roadside signs as they were passing and decided to take a small detour and stayed for the afternoon.
What they saw were nine splendid gardens (or rather eight splendid gardens and mine) offering a wide variety of planting and features including a large wildlife pond with an island, a giant sequoia, unusual and rare plants, 140 varieties of apple tree and a crocodile! The gardens all reflected a great deal of thought and meticulous upkeep by their owners and were variously set against the stunning backdrop of the views across to the Kilburn White Horse, Wass Bank or the Vale of York. This is scenery that we see every day and perhaps take for granted until we are reminded of the beautiful surroundings we live in.
As well as opening their garden Breda and Mike Wells held a plant sale, which attracted a good deal of interest on the day and was still selling plants on Monday!
In addition to the gardens and the plant sale, ‘Orchards of Husthwaite' opened their apple press and production unit at the Manor House and provided visitors with the opportunity to sample the cider and fruit juices. At the village hall, the ‘Apple Tree Café' was hugely successful thanks to the efforts of many volunteers, who made sandwiches and baked cakes or scones for afternoon teas.
One enthusiastic visitor described it as the best open gardens she had ever been to and while most others weren't quite as effusive, the overall reaction was very positive and all seemed to enjoy the afternoon and the rare opportunity to see beautiful parts of the village that are usually hidden.
The Open Gardens raised £1,200 for village hall funds. Given the weather forecast and the morning's rain and low cloud, this is not a bad result. The money will go towards the cost of landscaping the village hall site (the gardens may have looked splendid, but the village hall grounds are decidedly poor) and of improving the ventilation in the main hall when it is busy during warm weather.
Over seventy village ‘volunteers' helped with the Open Gardens so this was very much a village effort. It is impossible to name them all here, but special thanks should go to the garden owners, who made the day possible by kindly opening their gardens - Cathy and Mike Barker, Hannah and Gerald Crane, Debbie Lewis-Green, Jane Maloney and Jan Janiurek, Yasmina and Steve McCallister, Annie and Hugh Richardson, Maxine and Keith Templeman and Breda and Mike Wells (and Margaret and I); also to Lynne Colton for organising the Apple Tree Café and to Pippa Bailey, who along with Breda and Mike Wells helped to organise the event.
Thanks to all of them and to the many other villagers who helped to make the Open Gardens event a success.