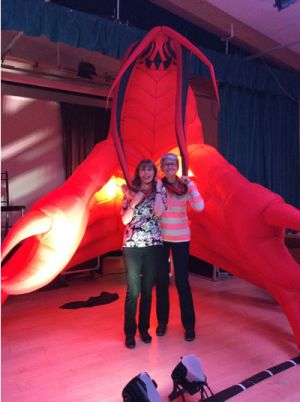 Angela Hall, Director of Rural Arts, was part of the organisation that sponsored Friday's fantastic evening.

She has kindly written the following piece.

Pre bank holiday Friday night and looking for something cultural and local to go to I found myself at a Rural Arts ON Tour event at Husthwaite Village Hall.
After a dash to get there for 7.30 and a ride around the village in an effort to find the venue we eventually arrived and had pre drinks of local Husthwaite cider before settling down to watch the act alongside a nearly full house including a large number of children and young people.
With only the publicity blurb to refer to and performers looking like a cross between Tommy Cooper and Bruce Forsyth I was beginning to wish I hadn't taken a seat on the front row, however the performancewas less about audience humiliation and more about astonishing feats of digital magic, physical theatre mixed with great music and a few big props thrown in. It has to be said that the performance was a show in two halves, the first set had duo Avanti and Artizani introducing the start of their impossible feats in a gentle and light hearted way with interesting use of film to weave in the back-story of what happened to fellow performer Maureen one night in Grimsby!
My husband was given a large bell to sound the end of each big feat and after the break with only two impossible things left the show took a rather dark turn with blood splattered chemists coats, giant

Russian Cossacks and an amazing electronically operated ventriloquists dummy stealing the show. Oh, and lets not forget the gigantic, illuminated, inflatable lobster.
The audience loved it and the show seemed to appeal to all ages. Both young and old were shouting and encouraging the performers and even the baby on the front row despite a few nasty moments with the guillotine box was stroking the lobster at the finale.
During the break we were made really welcome and given a guided tour of the village hall, which included a beautiful main hall with a lovely wooden floor, great acoustics, demountable stage and impressive stage lighting. Every rural touring theatre companies dream! 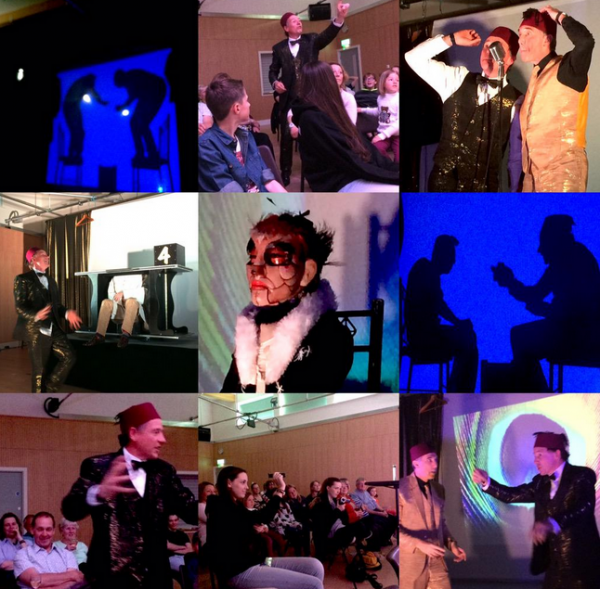 A fair part of the audience consisted of young children, who thoroughly enjoyed the perfomance.  Maddy Gordon- Finlayson (10) has described her eveming:

On Friday I went to a very, well, unusual performance. At the start I wasn't really sure what to think about what I was going to see next; I definitely didn't expect to see a giant inflatable lobster! (I wouldn't mind one myself actually.)
I couldn't get my head around the magic. How they did the balancing chair act I don't know. It was very funny when they put the mind-reading hat on my nana!
I thought that they were extremely inventive, funny and creative with the way they performed that night. I have never seen a performance like it.