Snake Davis Band in Husthwaite What a night! 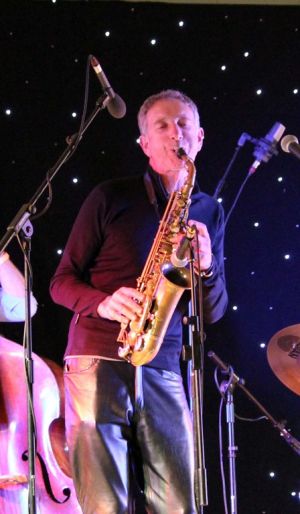 You could tell that many in the audience knew what they were in for. Some told me they go to all his gigs in Yorkshire. And the tickets sold like hot cakes. Nothing prepared you for the effect of the first few notes. It was an astonishing evening of brilliant music, superb musicianship, good dancing and a bit of confusion.
Snake Davis is often called "The jazz world's best kept secret". He oughtn't to be; he has played with everybody you've ever heard of, written film scores and tours continuously. His style sounds instantly familiar. He plays different saxophones exquisitely, as well as the flute and a Japanese woodwind instrument I'd never seen before, the shakuhachi. There was smooth jazz, soul and lots more in different genres. The audience loved his extended treatment of two ballads; Mary's Prayer, from the 80's and How Good It Is, an old Marvin Gaye classic.

He was stunning...but so was the band. Paul Birchall played keyboards and Ali Thynne was on drums. Both are exceptional musicians given lots of time to spotlight what they could do. For my money, the stand-out performance was by Simon Goulding, an absolutely extraordinary bass player who electrified the whole session. I went there with our Italian visitor Matteo. He leaned across half-way through and said "I can't believe this is happening in a little village in Yorkshire. And they are all dancing. We wouldn't do that." So much for reserved Englishness.
So, a wonderful evening of the best music...unforgettable.
Some special thanks; first to Gila Robinson for thinking of the idea in the first place and making sure it happened. To Mike Wells for sound and lighting fit for a major venue (which Snake Davis was really impressed by) and to Oliver Pickstone who spent most of the day setting up the stage and sound with Mike. To all the volunteers who manned the bar which was busy all night and to Will and Stephen who braved the pouring rain to make sure the parking didn't go haywire. Speaking of avoiding confusion; this was our first attempt at a sitting and standing gig of such importance. We learned a lot about how to organise that bit.
Final thought; he wants to come back next year. On the strength of this, it will be in the diaries months ahead and a sell-out.
Andrew Coulthard