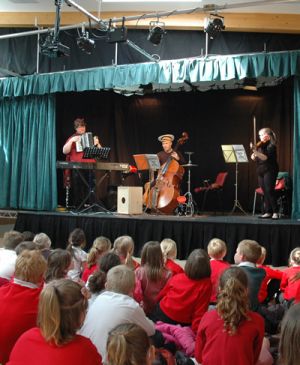 We had a hugely entertaining afternoon at the Village Hall last week when the Gatto Marte Trio performed their interactive opera buffa "Colombo Tutto Tondo" (Columbus - The World Is Round) for the children of Husthwaite Village Primary School and the Orchard Village Club.

The very talented and versatile trio were Pietro Lusvardi (Double Bass, Guitar, Ukelele, Percussion, Harmonica and Kazoo) as Admiral Columbus; Ben Newton (Keyboards, Piano Accordion, Clarinet, Bass Clarinet... and Recorder) as the Admiral's faithful parrot plus both the King and Queen of Spain; and Katie Foster (Violin and audience choreography) as the mermaid Miss Colombina.

Pietro was originally commissioned to write the opera by Teesside University, where it was first performed in 2009.

The performance in the Village Hall was the first performance of the version adapted for children. 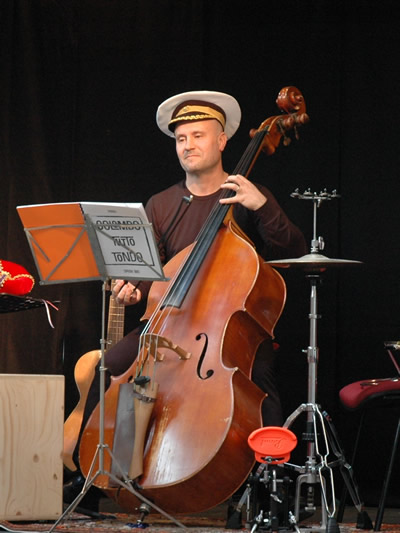 Pietro has toured extensively in Europe and the USA playing both classical music and jazz and has played his own double bass concerto with the Hull Philharmonic.

Ben was the BBC/Guardian Young Composer of the Year in 2005, and has worked extensively as Musical Director and arranger forHull Truck Theatre and the Northern Academy of Performing Arts The three of them are planned to return Husthwaite on the 10th July for an evening of music including Django Reinhardt, Stephane Grappelli and Piazzolla, plus some classical/baroque items too.