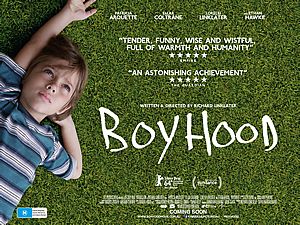 April 16th "Boyhood" Cert 15 - BAFTA winning Best Film, Filmed over 12 years with the same cast, BOYHOOD is a groundbreaking story of growing up as seen through the eyes of a child who literally grows up on screen before our eyes.

It charts the rocky terrain of childhood like no other film has before. Set to a soundtrack spanning the years from Coldplay's Yellow to Arcade Fire's Deep Blue.
BOYHOOD is both a nostalgic time capsule of the recent past and an ode to growing up and parenting.

May 21st "Deux Jours, Une Nuit" Cert 15 (French with English Subtitles) - Sandra, a young Belgian mother, discovers that her workmates have opted for a significant pay bonus, in exchange for her dismissal.
During a medical leave of absence, Sandra's boss decides the company can only finance the annual bonuses for sixteen employees, or Sandra's job, leaving the decision to those sixteen. She has only one weekend to convince her colleagues to give up their bonuses so that she can keep her job.
Stars Marion Cotillard ("Piaf", "Midnight in Paris")