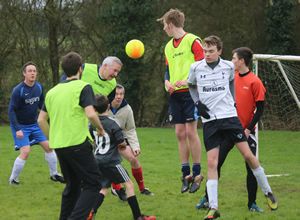 A totally new scientific method of team selection was used this year to ensure an evenly contested match with an appropriate level of competitiveness. As the game ended 2-2 and remained level after penalties we probably got it right. The teams lined up as Bibs versus Skins although for the spectator's sake the Skins remained fully clothed!

After around 10 minutes of pay the match was stopped to allow the referee, Lawrie Hill, to join the game. Apparently a communication problem and nothing to do with timekeeping or alcohol.

Flynn Tweddle opened the scoring and continued to influence the game with his application and skill. James Hunt volleyed in the second and it looked like the Skins were going to run away with it. 2-0 to the Skins.

When Will Mowatt's uncharacteristic lunge after some fancy footwork from Jeremy Walker left the advancing striker flat on his face it looked like the Bibs were in contention again. However, although Craig Colton hit the ball hard and straight, the ball ended up in the MUGA rather than the back of the net!

Not one for any fancy stuff Neil Millan headed in a corner to get the Bibs back in the game (2-1 Skins). Bib pressure finally told when Craig Colton just managed to squeeze the ball past the keeper after good work by David Millan.

Josh Sargent always looked a threat as did Joe Walker. Alex Fenwick looked calm and assured at all times and Mark Kingston will easily be first choice keeper for any Husthwaite Select with little Oscar Kingston made out of the same material.

Calum Mowatt and his contemporaries, Sam Chapell, Jack (Heskey) Somers, Callum Abbiss, and Henry Wardell not only made the numbers comfortable, they provided plenty of skilful endeavour only limited by inappropriate footwear and general fitness.

Tomas Nixon and Rob Colton enjoyed showing everyone the virtues of solid defending, Fergus McLanachan joined in the fun with some nice touches. Veteran Stephen Barker popped up now and then with telling contributions. Isla McLanachan represented the ladies of the village.

A totally satisfactory fun event was rounded off with intensive post match analysis, hot drinks and bacon sandwiches prepared and served by perhaps the most co-ordinated team on the day - Sheila Mowatt, Lynn and Rebecca Colton at the village hall.

Thanks to Brian Watt for the photos which made some of us look like footballers.

The full gallery can be seen here