Update on our Bus Services 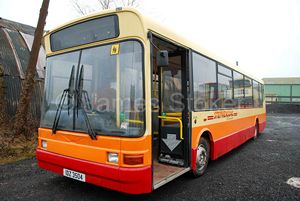 The good news is that Stephensons are "pleased to confirm that all.....services will continue to operate as per the existing timetables" For how long? In fact the current timetables on routes 31 and 59 will operate until at least 31 January 2015. There continues to be great uncertainty about what will happen then as services are being reviewed yet again. Most journeys through the village are financially supported by the County Council.

Last year NYCC consulted on proposals to slash over £1 million from its countywide support for public transport in 2014/15. Looking at the cuts then being proposed for services 31 and 59, local organisations and several individuals submitted comments and objections. It was easy to complain about the likely inconvenience of having fewer buses but more difficult to prove actual hardship arising from awkward timings or loss of essential journeys to get to hospital, doctor, work or education. So it was a very welcome surprise when it proved possible to continue with a reasonable timetable. There were even some minor service improvements introduced in April 2014. Thanks are due to Stephensons for this.

Perhaps that was the easy bit. The April 2014 timetable was launched with an expectation that September would bring further review because, it is understood, NYCC had been unable to agree a satisfactory package of costs and service patterns with Stephensons before the start of the new financial year. Fares went up in September but no detailed review took place. Apparently NYCC was in the process of arranging to terminate its contract with Stephensons from 1 November 2014 while opening up a new tendering process for the provision of bus services in this area. The latest news is that this has resulted in Stephensons keeping the contract for the time being and NYCC confirming that services will stay as they are until the end of January 2015. This is very short term and could still mean changes and possible bus service reductions thereafter.

A sting in the tail is that NYCC is currently putting operation of all the County's bus services out to tender yet again, prior to awarding new contracts to run up to March 2016. The quest for financial savings continues - so uncertainty prevails and there is still a real possibility of cuts. It would be unrealistic to expect Stephensons (or whoever wins the contract) to run many unsubsidised, fully commercial, bus services through Husthwaite. Last time that cuts were proposed some communities in the Wensleydale, Scarborough and other areas spoke up strongly and made their presence felt at County Hall but our local County Councillor said that she received few stirrings from Husthwaite. Will it need to be different next time ?