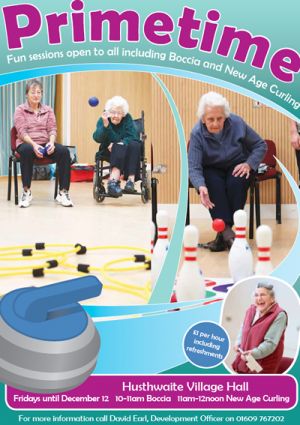 This project has been entered into the Galaxy Hot Chocolate prize fund. Eligible winners are chosen at random, there is also a prize for the most votes....see link below.

Anyone living in or near Husthwaite or Hutton Rudby can now have a go at paralympic sports such as boccia and new age kurling.

The sessions are part of Primetime, a joint Hambleton District Council and North Yorkshire Sport initiative. It aims to provide opportunities for socialising and physical activity in rural communities, particularly among older, less mobile and isolated residents.
The intention is to sustain Primetime activities in the new year, after the pilot scheme is complete. Currently we are widening our catchment area to attract participants from neighbouring villages, and inviting younger people to join in. Husthwaite County Primary School is interested in such inter-generational community activity. We need more volunteers to lead the sessions and to serve refreshments.
Fourteen people came along to a recent session, including visitors from the Community Day Centre at Springhill Court brought by Easingwold & District Community Care Association's volunteer drivers.

Some were nervous at first but soon everybody got into the swing of the sports, which feature in the Paralympic Games. Village regulars, such as Phyllis Clark, Bessie Fox, Dot Moncaster and Joyce Wise, work up a good competitive spirit.
Boccia (pronounced ‘bot-cha') is a type of short mat bowls. In new age kurling the ‘stones' are on ball bearings.
Phyllis, who competes from her wheelchair, says, ‘It's a very good sociable event. I enjoy the games. We get quite competitive.'
‘It's a social project,' says David Earl, Hambleton DC's Health and Wellbeing Development Officer, ‘aimed at lonely, isolated or disabled people encouraging them to get out of the house into a place where they can sit and chat, make new friends and reminisce with older ones. I'm delighted with the start we have made here.'
Three more North Yorkshire venues will be invited to participate if this pilot scheme is successful. Husthwaite was selected via the village website. It shows Husthwaite to be a highly active community, and therefore likely to be motivated to support such an enterprise.
Richard Wood, who regularly attends Primetime, adds, ‘The Big Lottery was convinced we were willing and able to run projects aiming at whole community involvement, and that was a key reason for financing our new hall. I very much hope that our elderly neighbours will be joined by other people from the village. If you think you can beat Phyllis Cark at these games let's be seeing you. You could be talent spotted by the short mat bowling club at the same time. That's a warning.'
Primetime takes places at Husthwaite Village Hall on Fridays 10am-12noon. Everyone is welcome, price £2 including refreshments.
Robin Walton
868247 robinaatgestalt@btinternet.com