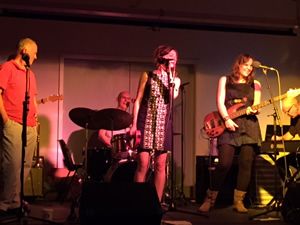 On Friday 3rd October a new "First" for the Husthwaite Village Hall was thoroughly enjoyed by all.
Jeromes, a six-piece band from York, played to an enthusiastic audience an eclectic mix of Jazz, Funk, Rhythm & Blues.

The evening got off to a fantastic start with several "locals" unable to stop those dancing feet (hips & several other parts of the body), getting up to dance along to the very first song. Jeromes commented that this was a first for them in all the years of playing... Go On Husthwaite, show them how its done!
With the band and bar in full swing, the dancing continued until the very end.

When the band finished we were treated to "Atul's World Disco" which started off as a mixed selection of dance music from around the world. However, Atul quickly
found our level, finishing with some popular 80's & 90's favourites!!

A great night which hopefully will be one of many. Thanks to Gila & Zoe for organising, they have a few more potential bookings up their sleeves I believe, including "Snake Davis" which will be an amazing night.

Thanks also to Mike & Breda for spending their wedding anniversary supporting the village hall with providing sound support for the band!

Sheila Mowatt (On Behalf of the Village Hall Committee)