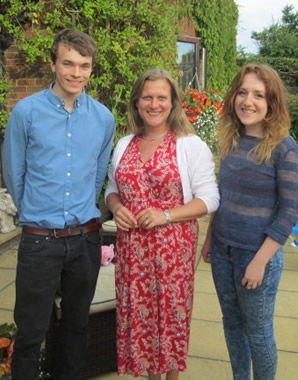 Did you know that the last 3 consecutive Head Boys & Girls at Easingwold Secondary were educated at the Husthwaite Village School?
For the last three years, Husthwaite School has been the primary education establishment for Easingwold Head Boys in 2012 & 2013 and most recently, Head Girl for 2014.
Matthew Batten (2012), Calum Mowatt (2013) & Polly Cuthbert (2014) all grew up in and around Husthwaite and attended the local school. For such a small community school this is an amazing achievement for which the school and parents should be very proud. Achieving Head Boy/Head Girl status at Easingwold is no easy task. The position is fiercely sought after and expectations of the candidates are high. The candidates go through a process of formal application, interviews and short listing before they can be successfully appointed.
Calum & Polly recently helped at the retirement party of one of their former primary teachers, Sally Gall. A great photo opportunity indeed!
When asked about memories of the school, Polly said "I look back at my primary school years and I am hugely grateful for the constant support from teachers. Especially Mrs Gall & Mrs Wilson. I don't think I would even consider doing Theatre at University without their encouragement. I'm actually surprised they put up with me for that long!"
Calum also added his thoughts, "I thoroughly enjoyed my time at Husthwaite. I believe that both the entertaining and educational aspects of the school provided me with an ideal foundation for life as a student at Easingwold and the future!"
Matthew is currently travelling, having taken a year out. Later in the year he plans to go to Newcastle University to study Biomedical Science, Calum hopes to go to Edinburgh University also this year to study Philosophy, and Polly will remain at Easingwold to complete her final year in 6th Form as Head Girl.
Husthwaite School celebrates its 40th Birthday this year. Clearly its high standards and expectations from both students and teachers pays off, 3 Head Students in a row is a Hat Trick not many small local schools can claim.