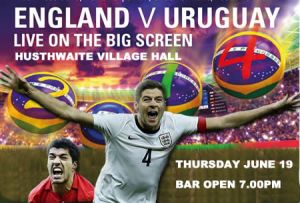 After a long hard season we now have the World Cup in June. The first match is on the 12th of June when Brazil open the tournament against Croatia.

To whet our appetite for the tournament we are going to have a warm up night on Friday the 13th of June with the opportunity to join the Husthwaite World Cup Fantasy Football League; take part in a table football tournament; watch the Spain vs Holland game and have a drink from the bar. The bar will be open from 7.30pm.