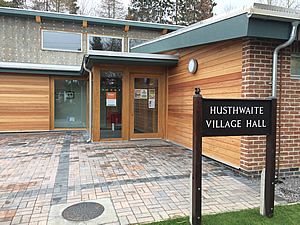 Short Mat Bowls: The short mat bowls club is now running weekly on a Monday night. The normal hours are 7-9pm but while Drover's Road rehearsals are taking place from 9th of June until 21st of July inclusive the start time will be 8pm. If you haven't had a go yet then come along and try your hand. If you want any further information please contact Malcolm French (868779).

Ballroom and Latin American Dancing
This is a new class which is run by Lauren Day. It runs from 7-9pm. Come along as a couple or on your own - the class is run so that it doesn't matter. For more details contact Lauren (07808 540791).

Film Club
The Film Club is held on the 3rd Wednesday of each month. We now have a new sound system installed and the sound quality is excellent. The next film will be Saving Mr Banks on the 18th of June. The bar will be open at 7.00pm and the film will start at 7.30pm.

Quiz
The next quizzes will be on Sunday the 8th of June and Sunday the 13th of July. The quiz starts at 7.00pm with the bar open at 6.45pm.

Circuits
The first circuits session run by Chris Short was held on the 11th of May. Some of us found it quite tough but fortunately we didn't need to call on any of the First Responders who looked keen to try out their new found skills!

The session was fun and varied and importantly you can go at your own pace. The next session will be the 15th of June and will then be weekly throughout the summer. As a one-off the 15th June session will be held at the MUGA as the Village Market is in the hall.

World Cup
After a long hard season we now have the World Cup in June. The first match is on the 12th of June when Brazil open the tournament against Croatia.

To whet our appetite for the tournament we are going to have a warm up night on Friday the 13th of June with the opportunity to join the Husthwaite World Cup Fantasy Football League; take part in a table football tournament; watch some previous World Cup highlights and have a drink from the bar. The bar will be open from 7.30pm.

Ceilidh
We are holding a ceilidh on the longest day, the 21st of June. The ceilidh will start at 7.30pm. Dances will be called by Brian Watt who will ensure that we all move roughly in the right direction and have a fun night. Tickets are £5 and are available from Will Mowatt (868196) or from the village shop.

On the 11th July we have a comedy night. We have been very fortunate to get James Acaster to come to Husthwaite in advance of his appearance at this year's Edinburgh Fringe. James has been nominated for the best comedy at the Edinburgh Fringe in both 2012 and 2013. He has appeared on 8 out of 10 Cats and Never Mind the Buzzcocks. Tickets are available now from the village shop or contact Calum Mowatt (868196).

Of course the hall is there for us all to use so if you just want to hire the hall or to suggest an activity or event please contact Zoe Lodge (Hall Hire 868117 or hallbookings@husthwaitevillage.com) or Gila Robinson (Events - 868216).

Building
The final outstanding items will either have been completed or will be completed very soon. This includes the rendering to finish the walls and the Pathway to Success.

In the hall, the audio visual system has been installed by Mike Wells and wi-fi is now available.

Grand Opening Event
On Saturday the 12th of July we are having the official opening of the village hall. We wanted the hall to be opened by someone from our community and have asked John Williamson, our retired milkman, to cut the ribbon. The ceremony will begin at 11.00 am with drinks and canapés served afterwards in the village hall. Everyone is welcome to attend.