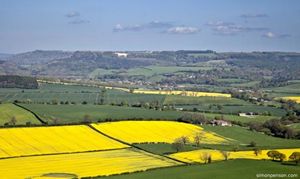 Despite pleas from the Parish Council, turnout for the AGM on May 20th was disappointing however the Parish Council is looking at this in a positive way; if few/no villagers attend the bi-monthly meetings in the Village Hall then the PC must assume that residents of Husthwaite are happy with how things are done in and around the village and have no questions, queries or concerns. If this is not the case and you do have a question query or concern relating to matters that are dealt with by the PC, or by Hambleton District or North Yorkshire County Council then you will be welcome at the next meeting on July 15th at 7:30pm in the Village Hall.

First of all a huge 'Thank you' went to Barrie Ward for his services to Husthwaite as Parish Council Clerk over the last ten years, he will be sorely missed. As way of showing our appreciation Carol Fenwick presented Barrie with a Squirrel-man breadboard made by Trevor Hutchinson.
WE ARE STILL DESPERATELY SEEKING A PARISH CLERK, if you or anyone you know would like to find out what is involved please contact one of your Parish Councilors, there is a salary of quite a few hundred pounds involved...!

Parish Councilors Positions & Roles:
Carol Fenwick was appointed Chair for another year and also being responsible for Beckwith Trust, Street Lighting, Parish Liaison, Police Liaisons/Neighbourhood Watch, Village Hall, Risk Assessment and the Recreation Area
Elaine Smith Vice Chair for another year and Easingwold & Villages Forum & YLCA
Paul Escreet is in charge of Highways (I hear many pothole emails making their way to you already Paul!)
Barney Smith will deal with Footpaths/Public Rights of Way and Communications/Publicity
Alison Gambles will assist with the Recreation Area responsibilities.

Community First Responders
Husthwaite now has NINE fully trained Community First Responders (CFR's) with a further four to be trained later this year.
When the scheme goes live later in June the nine trained CFR's will take turns to be ‘on call' by means of a rota system. IF YOU ARE IN NEED OF EMERGENCY CARE PLEASE CALL 999 AND ASK FOR AN AMBULANCE IN THE NORMAL WAY, it is not up you to organise a CFR the Ambulance service will firstly make sure an Ambulance is on its way to you before calling the CFR to see if they are available to respond, CFR's do not attend all calls especially not trauma cases.  CFR's cannot respond to calls that are not made through 999.

Cemetery and MUGA Moss!
The path in the cemetery and the surface of the MUGA is now free of moss!  The total cost of the clearance was a mere £70.63, thanks to volunteers for applying the product!

Bus Service Cuts
We have only lost one afternoon service, reducing total services each way to five.  The last service at 18:18 now goes all the way to York rather than terminating in Easingwold.

The Pub
After a distinct lack of activity Husthwaite PC have asked HDC, via Caroline Patmore, if they have any idea what is happening at the property.  Various rumours have been spreading throughout the village including Skelwith have sold the pub however the PC listed the pub as a community asset last year which prevent it from being sold without the village being told and given six months to raise the necessary funds to buy it.
Although there is nothing to stop Skelwith selling the pub it would mean that if it has already been sold the sale would be illegal/void!

Street Signs
Husthwaite PC will write to HDC to see if the road signs around the village will be refurbished, as they are all looking particularly tatty.

Dog Fouling
A new Dog Warden role has been created by HDC to clamp down on people who do not clear up after their dogs.  They will be armed with cameras and will issue on the spot fines, this is something that HDC are really keen on promoting so if you do not clear up after your dog - BEWARE they are after you!  There are also incentives for people to report you!

Prices are being obtained with a view to replacing the Bin on the Village Green.

Grass Cutting
Area outside of the MUGA is scheduled to be cut once a month, as is the Woodland area behind the MUGA

The Parish Plan
This is due to be reviewed and the PC will start by updating the questionnaire that was sent out some 8 years ago.  The PC will not be re-distributing the whole questionnaire but sending out a simplified version.
It will also address what people wanted back then and what the PC have since delivered.

Insurance
This has been renewed at a cost of £904 and covers things such as public liability, fences, buildings, gates, gym equipment at the Recreation Area etc etc

Planning
Greystones High St APPROVED
West Terrace APPROVED but PC will be writing to HDC regarding the lack of response from Highways on this particular application, the PC feel that Highways should have objected to the application for various reasons.  Highways are asked to comment on most if not all applications however they rarely even visit a site!
13 East View CONSULTATION ONGOING

Allerton Park Incinerator
No decision has been made by NYCC but will be by October, we are unanimously opposed to this multi-million pound out of date technology project.