From 'Mary Rose to Castle Howard' 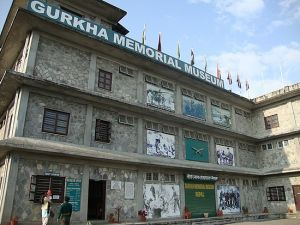 Guy Wilson, Husthwaite History Society's  much travelled historian and arms expert, entertained a fascinated and enthralled audience to a dramatic presentation in the village hall on the evening of March 27th.
He first described his experiences following his recent return from Nepal.  There he was charged with updating the material and displays at the Ghurkha Military Museum at Pokhara and to extend the training of the staff there.  He was treated to traditional Gurkha hospitality and thoroughly enjoyed being an honoured working guest.  In addition he helped to install computers in local schools - something that had hitherto been absent.  His use of photographic slides and movie material, where appropriate, added reality to the spoken word.
Following his Nepalese experience, some investigations closer to home were described. On behalf of the Yorkshire Country House Association Guy was commissioned to research the wartime involvement of the various families and staffs of the Partnership during time of war dating back to Napoleonic times.  His findings, with particular reference to Castle Howard, formed the second topic of the evening.
Guy finally described his historical interest with the raising of the 'Mary Rose', Henry VIII's carrack-type warship salvaged in 1982.  His particular interest was in the weaponry on board and the group was keen to ascertain the effectiveness of a particular type of gun. Together with a local friend and iron work specialist, Chris Topp, the team recreated the gun and demonstrated on film the results of their hard work. The evening really finished 'with a bang' as his audience enjoyed visual and ear splitting evidence that the gun worked perfectly!