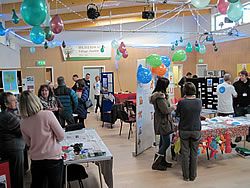 The village hall is getting busier with a number of new activities now up and running alongside some of the regular activities.

Short Mat Bowls
We had 22 people come along to try their hand at Short Mat Bowls and there was general agreement to set up a club. We've been able to purchase a second mat and the plan is to start a regular evening session on Tuesdays from 7-9pm. We will start the regular session on 20 May and play through the summer with the aim of being ready to join a league in the autumn. We need a good squad so please come along and have a go. If you want any further information please contact Malcolm French (868779).

Film Club
We had a record turn out on 29th of March to watch Captain Phillips with 31 attendees including a number of visitors from Coxwold and Oulston. The next films will be Philomena on the 16th of April and Rush on the 21st of May. The bar will be open at 7.00pm and the film will start at 7.30pm.

As a trial to test interest we are also going to show Up during the Easter holidays. Although it's primarily a children's film, it's a wonderful watch for all ages. The film will be shown on April the 19th at 10.00am. Everybody welcome. Entry is by donation. Please contact Calum Mowatt (868196) for further information.

Table Tennis
The next table tennis session is on the 13th of April. We plan to then head outside in May with activities down at the MUGA. Start time is 10.00am.

Future Events
May
We are aiming to bring Jeromes to the hall in May. Jeromes are a six-piece band of soulful jazzy funksters from York, playing an eclectic mix of blues, funk, soul, jazz and swing.

In addition there is a pirate theme childrens' activity workshop on the 10th of May followed by a panto style Pirate themed family show presented by Defying Gravity on the afternoon of the 17th.

June
We will be opening the hall to support England's efforts in the World Cup which hopefully will follow on into July. A world cup themed table football tournament will be run alongside.

There will be a ceilidh on the longest day, the 21st of June.

July
We also have been very fortunate to land a highly rated comedian in July. Twice nominated for the Best Show comedy award at the Edinburgh fringe and with appearances on 8 out of 10 Cats and Never Mind the Buzzcocks, we are extremely lucky to have this comedian drop in on Husthwaite with his new show enroute to Edinburgh. The show will be on the 11th of July. More details next newsletter.

Of course the hall is there for us all to use so if you just want to hire the hall or to suggest an activity or event please contact Zoe Lodge (Hall Hire 868117 or hallbookings@husthwaiyevillage.com) or Gila Robinson (Events - 868216). Hall hire rates are detailed on page ? of this newsletter.

Computers
We have secured funding to buy 6 laptops for general use in the hall. We have been able to get higher spec laptops by trading in some old computers, 4 of whom were donated by Hunters the estate agents. We plan to run some drop in sessions where the laptops will be available and we will have helpers on hand to answer questions and allow you to get familiar with the laptops. This will allow us to gauge demand and develop sessions to fit what people would like to do.

The Building
The building has just been signed off by building control. This then releases the final funding from the Big Lottery.

The snagging issues are being resolved under the careful scrutiny of The Building Group. The floor covering in the reception area has been replaced following a flood on the first day we had the building.

We have had to wait for the walls to dry out for the rendering to be completed and we hope that this will be done by the end of April.

Pathway to Success
The verge next to the road looks much nicer after Jeremy Walker laid grass instead of the unsightly mud that was there. We are planning to lay the pavers that have been bought between the grass verge and the hall over the next couple of months. Pavers are still available and if you want to buy one please get in touch with Debbie Lewis-Green (868234).

In time we will carry out further landscaping round the hall but will need to build up funds to allow us to do this.