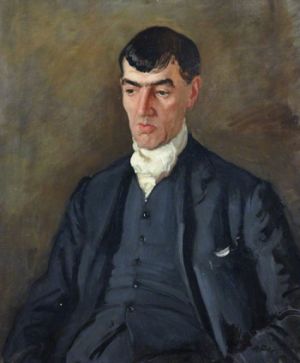 Various people who once lived in Husthwaite, if only for a few years, became famous, e.g William Peckitt who reintroduced the art of stained glass making (leaflets inside the church and a plaque outside it) and his brother Henry who became an apothecary, possibly supplying medications or even attending George III in London (an article by Cooper Harding, who gave a memorable talk a few years ago, is in progress).

Several different families from Northumberland came to live at Beacon Banks around 1900 when the Wailes family were living elsewhere. One of these was the widow Margaret Boyd Crawhall, her sons Hugh and Joseph and daughter Beatrice all born in Morpeth - they lived there between 1893 and 1896 before they moved on to Brandsby.

Joseph became a well known artist.
Coming from the wealthy family in Morpeth, financial independence enabled him to devote his life to his twin passions of painting and hunting. At aged 19, the 1881 census gives Joseph's occupation as an artist and animal painter. After training in London and Paris he became one of the Glasgow Boys who were pioneering painters (1880-1900) who rebelled against the art establishment. By the turn of the century they were acknowledged to be the only British painters of international standing.

Joseph Crawhall was one of those who "pushed the boundaries of watercolour, experimented with gouache and revitalised the use of pastel". He started painting on fine woven linen rather than paper around 1893 - evidently finding himself without paper while visiting his sister Beatrice, he borrowed some of her sewing linen!

He became a regular exhibitor at the Royal Academy's Summer Exhibition. Some of his paintings, especially those showing people on horseback and hunting were said to be inspired by the scenery around Beacon Banks. It is said he chose to live in the area because of the abundance of fine horses in the North Riding at that time. He was a superb horseman and able gentleman jockey winning three successive annual races in his favourite painting venue of Tangier, in Morocco in the early 1890s. Brandsby became his home towards the end of his career which had seen his work sell for more than any of the other Glasgow Boys and at Dale End with its own stables, his time would have been spent breeding hunters and racehorses and sharing his love of hunting with his brother-in-law John Wood who had married his sister Beatrice and also lived in Brandsby. He lived there for many years but his death was registered in Kensington in 1913. His mother was still living at Dale End in 1921 and eventually her death at age 95 was registered in Easingwold seven years later. Hugh had married and returned to live in Northumberland at Rothbury.

Joseph came from an artistically gifted family going back several generations and a collection of pictures, photos and other memorabilia from them came up for auction in 2007 and sold for over £45,000!
Angela Ovenston, with grateful thanks to Sheila Redfern for some of the information.