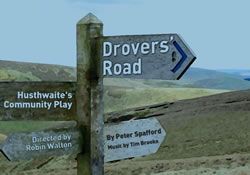 This is your chance to see if you would like to take part in this summer's play Drovers' Road. We especially need secondary school-age players to lead the adventure. Cast and crewmembers of all ages are welcome to join the project. Many people have already volunteered their services. There will be opportunities for youngsters to learn about the various backstage skills, such as lighting, sound, filming and photography, make-up and costume.
David Pike is the musical director and Robin Walton is directing the drama. Both were members of the original cast at Helmsley Arts Centre in June 2013, and we are delighted to offer this unique community play to Husthwaite.
After the initial readings, the play will be cast. The main rehearsals will then take place after the summer half term. At first these will be scheduled for small groups of players, building up to full cast participation in July.
The play will be performed on Wednesday 23rd, Thursday 24th, Friday 25th July at 7.00pm and on Saturday 26th July at 2.00pm. There will be an after-show party on Saturday evening.

The play begins in the street. Modern day children set off on their adventure through the streets of Husthwaite, walking down the Nookin from Husthwaite village hall to gather on Church Green. The audience is invited either to wear modern day clothing appropriate to users of the Drovers' Road, or costume relevant to our enactment, which is set in the reign of King Edward II, 1322. Audience members may join in anywhere in Husthwaite, along the planned route:

The ghosts of the drovers, inhabitants of the Limekiln House pub, the King and his entourage will make their journey from Husthwaite village hall via East View down the High Street, to meet the assembled players on Church Green and to lead the audience up to the village hall. Anyone not wishing to walk may prefer to  await their arrival in the village hall. Seats will be numbered, and can be booked in advance. Details will follow shortly.

The play will then be cast, before the summer half term.

Rehearsals will begin in June, at first involving various small groups of players and leading up to full cast rehearsals throughout July.

The Husthwaite Ramblers Club is now planning two walks to set the scene for Drovers' Road. The first is on Sunday April 27th, leaving Husthwaite at 1.00pm. The route follows the drovers' road from near the Hambleton Inn on Sutton Bank, down to Scotch Corner, which features in the play. Incidentally, the chapel at Scotch Corner will be open to visitors on that Sunday, and the mysterious sculptures within the chapel will be on view.

The second walk is planned for Sunday May 18th, also leaving Husthwaite at 1.00pm. This route is from Keswick to Limekiln House, the now ruined drovers' inn which is central to the play.

Please let Mark Gambles know if you wish to join take part in either of these walks.
mark@magambles.eclipse.co.uk 869 004

Please tell Robin if you are interested in taking part in the play, Drovers' Road.
robinaatgestalt@btinternet.com
868 247