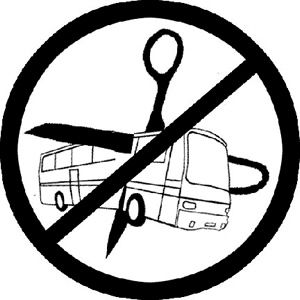 Despite all the fears about possible major loss of bus services Stephensons are planning to keep a reasonable level of service going. But the village must expect change and some reduction in April. The County Council decision to cut financial support for unremunerative services has forced bus operators in all parts of the County to reconsider what level of public transport they can afford to operate commercially while still fulfilling school transport contracts and making use of the limited subsidy that will continue to be offered.

Under pressure from Government to make across the board financial savings NYCC consulted the public on proposed cuts to bus subsidies throughout the County totalling just over £1 million. Over 2300 responses were submitted. The County Council finally decided to make savings of £2 million per year (including school transport) and told its officers to look for more cuts next year. The Husthwaite Community Hub and several individuals in the village expressed strong views about the proposals while fully accepting the case for some cuts to services where passenger numbers were few. The Hub was able to put forward arguments based on personal inconvenience but evidence of real hardship which may have impressed the decision makers was hard to prove. Compared with some parts of North Yorkshire where people were submitting comprehensive objections backed by local evidence it was possible for the Community Hub to make only a modest case. Nevertheless the outcome is likely to be more promising than we were first led to believe and thanks must go to all those who sent objections and representations to the County Council. NYCC claims to have listened and says "there will not be an adverse impact ........ because we have scaled back some of the proposals".

In mid-March NYCC published its proposals for how the new timetables would look after the £2 million 'bus subsidy reductions'. These are subject to final agreement and formal approvals. At the moment the expectation is that the following new timetables for Services 31 and 59 will operate from 22 April 2014.
ROUTE 31 (north of Easingwold) - 5 Buses each way (Mon to Sat)
In the Helmsley direction - two commercial peak time services departing Easingwold at 07.45 and 17.45 and three off peak subsidised services between 09.40 and 14.30. (Review in September)
In the Easingwold direction - one commercial service departing Helmsley at 17.45 and four off peak subsidised services between 09.30 and 15.50. (Review in September)
ROUTE 59 (Monday and Friday only)
Withdraw the 14.00 bus from Thirsk leaving just two journey opportunities, currently 10.35 and 12.55 from Husthwaite. Stephensons are looking at options to re-schedule these two services to give people more time in Thirsk between buses.

Things could still change and exact timings are yet to be announced. New timetables have to available at least 10 days before the start of revised services. The summer only "Moorsbus" has been discontinued.

In the longer term our rural public transport remains vulnerable. The Yorkshire Post (11 March) reported that campaigners have singled out changes to subsidised bus services as among the worst of Government funding cuts. The matter has been raised in Parliament and NYCC has decided to request the Government to change the law on concessionary fares/senior bus passes. For the moment Husthwaite bus users can breathe a sigh of relief but, looking to the future, the message goes out "Use the Buses or Lose Them" - surely not too much to ask in a village of over 400 people.