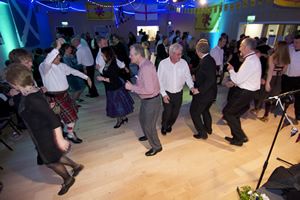 We were first introduced to the idea of Burns Night one night in November, when much to Sheila and Will Mowatts' surprise, we told them we have never been involved in the delights of such a celebration. (photo gallery here)

Maybe we lived too far south for this Scottish tradition to have reached us!  So after listening to their glowing reviews of previous events and how it can only be improved by the new Village Hall, we put our names down for what we were promised would be a night to remember, and so the 25th January 2014 was soon upon us, little did we know what we had let ourselves in for!!

The first thing they forgot to mention in our initial discussion was the mayhem which ensued upon entering the hall - the filling in of your dance card! Young and old all milling around trying to find a partner for not one but 8 dances! A simple request if you knew any of the people that you were approaching but daunting if you were new to the village. However, on introducing ourselves to total strangers 8 times over, we soon realised that everyone was in the same boat and the main aim was to fill your card before everyone became booked up. So, dance card complete, what's next?  The piping in of the haggis! Amazing, bagpipes, kilts, the lot! The whole hall was filled with the sound of the pipes along with the smell of the haggis being paraded around the hall. A stirring ode to the haggis, with knife in hand, was given by Brian Watts creating an atmosphere of pure anticipation. As impressive as this was, we will enjoy it even more next year when we have looked up the translation as we struggled to understand a word of it! Although I'm sure the mystery added to the overall effect!  Next, the food. Haggis, neeps and tatties! With thanks to Sheila Mowatt and Elaine Watts and their band of helpers for providing fantastic food, all piping hot and tasting amazing. A feat which I'm told was a lot easier than it was in the old hall! The finishing touch to the serving of the food was only improved by the wearing of the 'Scottish' aprons - very fetching! Then the buffet, very well organised with food to suit all tastes, even down to the cheese and biscuits.

The tradition continued with the Toast to the Lasses given by Malcolm French, reminding us all of the meaning and role of a WIFE! His words were lovingly responded to by Doreen French in the Reply from the Lasses, imparting a few words of wisdom to the crowd!   A sing-along then followed, accompanied by the band, leading us up to the grand finale - the dancing! Organised chaos!! With the capable voice of Brian again prevailing we followed dance steps that we had never heard before, once again accompanied by the fantastic sound of the band.
So all in all, a fantastic celebration of culture, food, dance and music. What a wonderful night out in our new Village Hall. Put us down again for next year Will!  Lynn and Craig Colton.