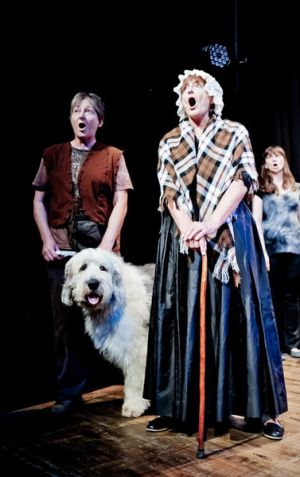 Husthwaite is now beginning to assemble a drama group for the 2014 production of Drovers's Road. Rehearsals will begin in earnest in the second half of the summer term. Please bear these dates in mind if you wish to participate, and watch this space for updated news.
If you are interested in being part of this exciting venture, please ring Robin on 868 247. We need many young people, as well as the more experienced among us, to offer their time and energy for this community play. We need actors and backstage crew, front of house helpers as well as chaperones and marshals for this production.
History of Drovers' Road:
The North York Moors National Park Authority commissioned Drovers' Road as part of their Lime and Ice project in 2013. The play was written by Peter Spafford with music by Tim Brooks. Drovers' Road was first performed at Helmsley Arts Centre in June 2013. Husthwaite villagers David Pike and Robin Walton with her Old English Sheepdog Drover, were members of the original cast. Husthwaite's 2014 community play is to be directed by Robin with David directing the music.
Scenario: 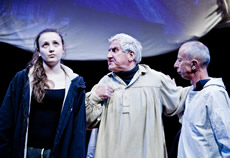 The play begins in the streets where ancient and modern users of the Drovers' Road meet. The players lead the audience to the new village hall, where the drama unfolds:
A group of modern-day children are on a hiking expedition along Hambleton Street, walking from Osmotherley towards the Visitors' Centre on Sutton Bank Top. Late in the day they take a short-cut, but the youngsters get lost in the fog. They decide to spend the night camping out on the open moor. Cold and hungry, they spend anxious hours huddled together, taking turns to keep watch as the others try to sleep.
Now the ghosts appear out of the darkness, coming along the Drovers' Road to amaze and terrify the dreaming children. They bring stories of times past, of the drovers with their Highland cattle and their droving dogs, and tales of vagabonds and thieves.
The scene changes to the Limekiln Inn. Here the travellers slake their thirst, eat their fill and turn their attention to the local lasses. Deals are struck, money changes hands. Soon the drovers take to the Road again, and are gone.
Soldiers now herald the arrival of King Edward II with his entourage, seeking battle with the marauding Scots.
Dates for your diary:
Husthwaite Village players will be performing Drovers' Road on Wednesday 23rd, Thursday 24th and Friday 25th July at 7.00pm with a Saturday matinee on July 26th July at 2.00pm. Ticket information will be available nearer the time on the village website.
The Husthwaite Ramblers are planning a walk on Sunday 18th May to set the scene for Drovers' Road. The chosen route begins in Kepwick and takes the quarry road up to Hambleton Street, a section of the drove road along the edge the North York Moors National Park. This leads us to Limekiln House, the ruins of the drovers' inn which features in the play.
Pictures courtesy of Chris J Parker Photography: christophoto.co.uk