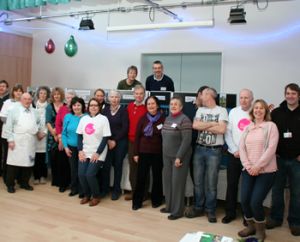 The new village hall in Husthwaite opened it's doors to the community on Saturday the 1st of February.

During the day 161 people visited the hall to explore it's interior and to find out what activities and events are planned for the future. Established clubs and new ventures were all represented with stands displaying their activities with eager volunteers trying to recruit new members. There will be a range of activities to suit all age groups.

There was a rapid turn around from the daytime event to get in shape for the evening party. The capacity of the hall was tested to the full and a sell out audience were entertained by Mark Ostyn accompanied by Gila Robinson playing a selection of classical music. The proceedings were then followed by David Pike who entertained the audience with his famous monologues.

The first half of the evening was completed with the world premiere of a new film entitled Husthwaite Hut. The film presented by Richard Wood and directed by Mike Wells was a fantastic memento of the old hall with villagers young and not so young recounting their memories of the old hall. Starting with it's journey from Ripon on the back of a rulley through to it's time as the disco capital of North Yorkshire, the emotional impact of the old hall was clear to see. DVDs of the film are available (e-mail info@bylandmedia.co.uk for copies).

A light supper followed before the cutting of a cake made by Erica Carr in the image of the new hall. Not only did the cake look good it also tasted wonderful.

It's not possible to have a party in Husthwaite with out the village band, A Bit of a Gamble, and the second half of the party involved lots of well known music and dancing.

Getting the new hall up and running would not have been possible with out huge support across the community but clearly without the donations from our funders would not have been possible at all. The Village Hall Committee would like to thank all those organisations and individuals who have given their generous support to the funding of the new hall.

During the day Margaret Silcock from the Co-op presented the village hall with a cheque which has been used to help equip the kitchen.