The Lost World A review by Anne Telfer 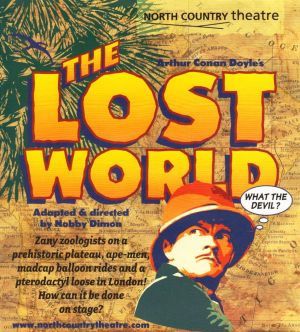 Members of the Sessay Book Club joined a full house of Husthwaite villagers and others for the recent production of The Lost World ( Conan Doyle) performed by North Country Theatre.
It was a privilege to be in the newly built Husthwaite Village Hall from what I understand to be its first function and to see another excellent play written and directed by Nobby Dimon. As always the actors held our attention for over two hours with humour, clear dialogue, movement of props and, this time, singing, which was an added bonus not to be missed.
The performance started with audience participation, being split into three groups , namely: the medics, professionals and general public (in the cheap seats) which served as an ice breaker and got the audience more comfortable in their seats. The plot was centred around an expedition to a plateau in the Amazon basin of South America where prehistoric animals survived.
The three intrepid explorers, plus the journalist, set off on their journey of discovery - with the aid of a few props, scenery and fitting background music all contributing to a realistic atmosphere. We saw them canoeing, crossing onto the plateau with the aid of a rope, Malone swimming underwater with the fish in Gladys' lake, observing dinosaurs from afar ( plastic models!), wrestling with pterodactyls ( which even flew!), shooting peeping monkeys and eventually escaping from the plateau in a balloon made from the stomach of a dinosaur which was beautifully and amusingly portrayed. The talking northern accented dinosaurs must also be mentioned, providing more hilarity.
We were fortunate to have seats near the front ( the cheap seats ) where it was possible to appreciate the huge physical effort and enthusiastic professionalism put into the performance by the actors, credit to them all. It was an evening to remember, touching all emotions. We will look forward to the promised autumn return of the Northern Theatre group.