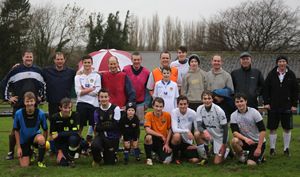 Rather than the usual ‘High Husthwaite' vs ‘Low Husthwaite' format, those with more experience, who should know better, elected to take on a much more dynamic and youthful team, who threatened to treat their elders like the Aussies have treated the English cricket team.

The school pitch was duly marked out by Jeremy Walker - the lines clearly showing just how much Jeremy had drunk the night before, and the weather did what it is good at - started badly, and got worse.

As the youngsters set the pace, with Tom, Sam James and Jack augmenting the local talent, those of more senior years had to dig deep to stay in touch. Unfortunately, Lawrie Hill as referee seemed to still be enjoying his Hogmanay tipple as he missed no fewer than half a dozen clear penalties, and failed to book a single player. 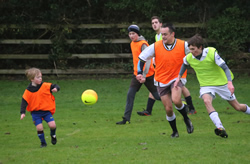 But, the senior team had their secret weapon. Its clear that the real ‘Oscar' doesn't play for Chelsea at all, and he was single handedly keeping the oldies in touch, often taking on two players at a time - the photo shows Calum Mowatt and Craig Colton easily dispossessed in the midfield as Oscar set off on another mazy run. Roy Hodgson was seen on the sidelines, taking notes.

The oldies slipped further behind as David Aspinall left the field unable to continue due to a tragic lack of ability, but Stephen ‘Ryan Giggs' Barker, making his 700th appearance for the village, looked much younger than 75 years old as he chased down the left wing, unfortunately while the ball was on the right wing.

Both goalkeepers (Cameron and Mark) had stunning displays, which really annoyed the crowd who just wanted more goals. 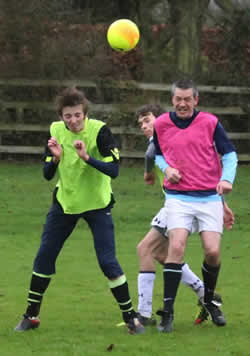 Every time the ball left the ground, the fear of heading the ball became apparent - in fact, the match has been recognized by the Guinness World Records as having the lowest number of headers in the history of the game. Photo shows Will Mowatt and Sam Chappell both anticipating the first header of the game in the 75th minute.

Finally, with everyone totally drenched and the risk of hypothermia rising rapidly, the referee came to his senses and awarded a penalty, which only took one entirely undeserved retake to convert.

The rain teemed down, the scores were tied and the match went to extra time. The crowd groaned, and mobile phones were soon to the fore, delaying lunch for another 20 minutes.

The winning goal for the Youth Select came six minutes into the golden goal period, with a suspicion that the goalkeeper had been told that his Yorkshire Puddings were about to be fed to the dog, it he didn't get home quickly.

The trophy was presented to the winning captain Calum Mowatt, by Mark Gambles - for no other reason than, having arrived late, Mark was the only person with dry hands.

Thanks to everyone for turning up, and to Will for organizing a great event !