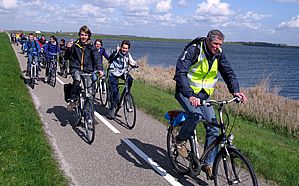 It is good news that busses could soon be banned from our roads. They are a great danger and do little to get people where they want to go; far better to go by bicycle. If you are able to get out of bed and shuffle around the house, you can ride a bike. Cycling is freedom, when you want, where you want. Cost almost zero.

Husthwaite is ideal for cycling with lots of little lanes going in all directions. Easingwold is half an hour away with a choice of three roads; direct by Acaster House, the cycle route on Thornton Lane or the eastern route through Oulston. With a pannier bag on the bike you can carry all your shopping.

A good place to buy a new bike is Willis's on Long Street in Easingwold http://www.mewillis.co.uk . They have a workshop at the back so can maintain the bike for you. Alternatively, in York is the Bike Rescue Project http://www.bikerescueproject.org.uk/ at Lendal Bridge. They will sell you the right bike, second hand and properly checked over.

As you get older the handlebars rise and the gears get lower. You want very low gears, so low that it may be as quick to walk but at least you can sit back and just wind your way up hill. This is possible with today's wide range of gears that were developed for mountain bikes. Given the pot holes on our roads you might want the fat tires of a mountain bike but they are a drag on a smooth road.

It is best that you carry things in a bag on the bike rather than in a rucksack on your shoulders. That means you need a pannier carrier. Absolutely watertight bags are made with welded seams by Ortlieb and Vaud. Stitched bags leak through the stitching.

Be conspicuous so wear bright colours, yellow or lemon. Forget fashion. After the London tube bombings, cycle sales increased and most were to women who discovered that they felt safer on a bike than in the Underground. Tuck your hair in so you are not in the eye of bad men. It is up to you whether you wear a helmet. There is no law about it and the Cyclists' Touring Club says the evidence is evenly split on the advantages and disadvantages. Never wear headphones; if you can't hear it coming, you can't avoid it.

If you must ride in the dark, have LED battery lights; they last a long time and are bright. Traffic at night is almost non-existent and being so far from a city with a clear sky the stars are wonderful.

You will soon discover that there are folding bikes. The best by far is Brompton. http://brompton.com/ On the train it is folded smaller than a suitcase and on London streets is faster than a Ferrari. From Husthwaite to Buckingham Palace takes less than four hours and that includes waiting for the train. Ride to Carlton, cross to Sessay and up to Thirsk. Very early in the morning when there is no traffic you can turn right in Carlton Husthwaite and meet the A19 where you go a short distance and then left onto the Sowerby road. In no time you arrive warm at Thirsk station.

Avoid the A19 and A170. Cyclists who insist they have a right to use these roads are legally correct and strategically stupid. Bikes and motor vehicles don't mix. Remember that under British law murder is legal when the victim is on a bicycle. That's not the case in The Netherlands. There, if there is a collision between a bicycle and a car, the presumption is always that the motorist is at fault. Cycle to Hull (I can show you a quiet route), take the ferry to Rotterdam (superb food on board) and potter around Holland. Cyclists have their own lanes. Come back to England converted and write to the local MP who will ignore you.