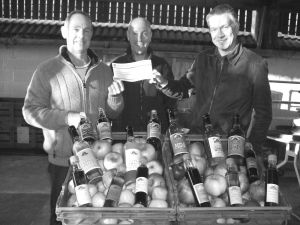 Husthwaite has been known as the Orchard Village due, to its history of fruit growing, which dates back three centuries. In mid-September, members of Husthwaite were given an opportunity to maintain the villager's tradition of supporting the production of Apple Juice and Cider in Husthwaite, whilst raising money for the New Village Hall.
The "Orchards of Husthwaite" kindly offered to pay for the collection of local apples, rather than having to buy them wholesale from outside the village. It was not fully appreciated but the first of many legal Scrumping sessions took place on Saturday 14th Sep 13. The starter event was well supported by adults, young persons from the village and a number of unexpected visitors, even as far as Italy.
Throughout September and on to early November, volunteers continued to use their valuable spare time to collect apples from many locations in around Husthwaite. At times there was a steady and plentiful flow of apples, to the point where crates were not available and some apples had to be pressed at an alternative venue.
This huge effort from within our community has proven that the production of apple juice, cider and liqueurs within the village is sustainable, as long as the volunteer baseline is maintained. In total the voluntary group collected 5505 Kilogrammes of apples, which generated a charity donation of £1101. The picture on the right records the presentation of the cheque by Cameron Smith (Orchards of Husthwaite Trustee) to Will Mowatt (Husthwaite Village Hall Chairman) and yours truly in the background.
May I take this last opportunity to thank all the volunteer leaders, collectors and just as importantly, the owners of the apple trees and orchards, as this tremendous task would not have been possible without their personal help and assistance.
Should anyone wish to purchase Apple Juice, Cider or Liqueurs from the "Orchards of Husthwaite" for Christmas, please see the advertisement on page 20
Mark Gambles Apple Collection Co-ordinator