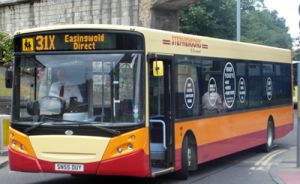 Philip Lawson outlines below exactly what the issues are regarding the paring down of our bus services.

The link to the consultation is here

The Husthwaite Community Hub is one of only 7 such groups in North Yorkshire. Working in conjunction with other organisations, including the Parish Council, it serves the local community and can represent their views.

The Hub has considered the proposed reductions to bus services. Its comments should be seen as a constructive attempt to help the County Council to achieve savings in bus service subsidy. The Hub has specifically looked at Services 30, 31 and 59 north of Easingwold, and requests that you consider carefully its comments as set out below.

SERVICES 30 and 31
It is noted that, at just over £3, the level of subsidy per passenger on Service 31 is well below that which supports many other services in the County. The Hub is aware of inconvenience and probable hardship that would be caused by the proposed reduction from 4 buses per day each way down to one only. The operator of No 31, Stephensons, makes a major contribution to school transport, running almost 50 routes at the beginning and end of the school day. There is an inescapable impression that some No 31 journeys are dominated by this priority business rather than public service demand, with some buses running at times to suit arrangements to get drivers and vehicles back to where they need to be. So the Hub does not dispute that certain journeys carry very few passengers and that it is in the public interest that savings should be made.

The proposals come at a bad time for Husthwaite when its village shop is up for sale and there are consequent community fears about further isolation being imposed upon the village. The retention of the mid - morning bus to York and a timetable commitment to serve York Rail Station are the only pleasing features in the Council's proposals. The inconsistent service to York Rail Station is one of the downsides of present arrangements. The proposed timing of the only return journey from York at 2pm (approx) will satisfy few and raises new questions about likely usage and, therefore, long term viability. The proposed loss of the 5pm (approx) return service from York would be a big blow and needs to be reconsidered. Villagers have mentioned the difficulties which the proposals, if implemented, would have for such things as their hospital visiting arrangements and keeping a variety of appointments as well as the gentler pleasures of shopping. The extent of the proposed cuts would undermine the efforts of one of our small businesses which offers a 'green' incentive to customers who leave the car at home and travel to the village by bus. Husthwaite is a designated Service Village with proposals for the construction of more affordable housing and it very difficult to see how the proposed bus service cuts would do other than set back this status.

So the Community Hub earnestly requests that consideration be given to Service 31 being reduced from 4 down to 2 buses per day, to include a lunchtime bus southwards and a late afternoon bus northwards in addition to what is being proposed in the consultation documents. If this cannot be accepted then the Hub would support the idea put forward by others that some Service 30 buses could divert from the A19 via Coxwold and Husthwaite on their journey between Thirsk and Easingwold, just as several already divert via Raskelf. The Hub considers that this could be made to work successfully with minimal or no subsidy but achievement would require coordination from yourselves using your statutory powers. The Hub is willing to discuss this possibility with you before final decisions are made to implement proposals which would have known and probably unknown adverse effects on village life.

SERVICE 59
This is an important but infrequent service giving people the opportunity to go to the doctor, dentist, bank etc in Thirsk as well as do a bit of shopping. Reduction from three journeys to two on Mon and Fri is accepted in principle by the Hub. However there is concern in the villages that the proposed timtable provides the travelling public with only 80 minutes in Thirsk, which is not long enough to keep appointments and do other things. It is requested that if and when service 59 is cut back the timetable is adjusted to allow more time in Thirsk.

The Husthwaite Community Hub thanks the County Council for providing this opportunity to comment and requests that you take its views fully into account.