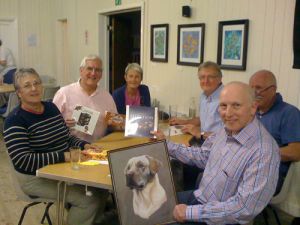 Cold Kirby host an annual quiz in their village hall for other villages in the North Yorkshire area.

Husthwaite was invited to send a team for the first time.  The team sent thought themselves the thoroughbreds of quizzing but the truth was, as is so often the case, they were the only ones who turned up.

A quick glance at the photo underlies the truth of that statement.

Cold Kirby’s hall is probably older than ours was and the harshness of the corrugated iron construction was mellowed by the Farrow and Ball colour scheme.  Oval Room Blue, I think.  Inside the colour scheme was predominately grey/silver reflecting the average age of the teams although there was one younger participant who identified a One Direction band boy or something.

The photo indicates some of the spot prizes won by the team.  Stephen was especially pleased with his dog painting.  Don’t worry, however, we all will get a chance to own it as it appears at other tombola’s over the next few years.

The team did the village proud as they came second amongst strong competition.  We may have come first if anyone had known the difference between his or her glockenspiel and xylophones.

Underpinning our enjoyment of the evening was the warmth and hospitality of our hosts and the chance to meet other people from quaintly named places.