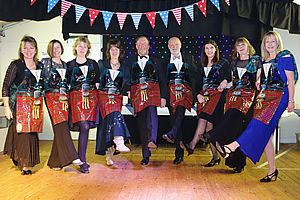 The 8th annual Burns Supper was held on Saturday 19th January at the Village Hall creating some village history. It is the last social event to be held in the current hall.80 people attended the function. The haggis was piped in by Mike Almond followed by the Address to the Haggis (Will Mowatt) and the Selkirk Grace (Brian Watt).

The meal started with the traditional haggis, neeps and tatties followed by an excellent buffet supplied by All. Lively and amusing toasts were made by Michael Graham who proposed the Toast to the Lassies and Lesley Seaman who responded on Behalf of the Lassies.

Wild Scottish dancing followed under the patient guidance of Brian Watt whose directions of right and left seemed to to get lost in translation. Jigs and reels were danced to the music of The Fiddler of Helperby; a good time was had by all.

Thanks must go to Brian and Elaine Watt and Sheila and Will Mowatt for creating and organising such a wonderful event.