Farewell Party for the Hall 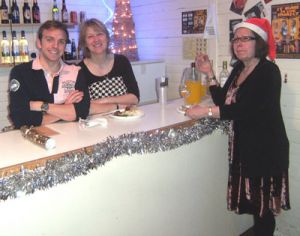 The old village hall must have wondered what on earth was going on. Its previous existence was as a home for future heroes prior to their transportation to the horrors of the First World War.
It then suffered the indignity of being uprooted from Ripon and dragged by horse and cart to Husthwaite.
It was then erected in a highly defensible position at the top of the Nookin rather than, as would have been more sensible, at the heart of the Village.

It had a facelift in 1984 when its asbestos roofing and zinc cladding were replaced, in the finest Yorkshire tradition; by the cheapest bricks money could buy.

Despite that it served the village well for many years, providing a welcoming home for many memorable events.

Last night, in a final celebration of its existence Vikki Nixon and Debbie Lewis-Green organised a terrific farewell Christmas Party in the hall.

The food was excellent (we brought our own) and the only issue was the flexibility of the paper plates and plastic cutlery, which turned everything into finger food.

A Bit of a Gamble belted out a host of new songs including some incredible Beatles covers. For a minute, if you half closed your eyes, it felt like we were in a time machine.

The audience was completely cross generational. A crying baby was a background to the strains of Happy Birthday' sung to celebrate Mary Barker's 90th. Teenagers seemed content with their faces illuminated by mobile phones.
Alcohol seemed to illuminate most other faces as unlikely friendships were forged.

Want to see who was there? Follow this link

When the band played ‘I would walk 500 miles' all the men got up, including Will Mowatt, and the hall began to shake.

Immediately after that, Alan Nixon seemed to hit a note that was unusual, even by his standards, when we realised it was the hall saying: "Enough is enough"

The VH had triggered the fire alarm in a desperate attempt to have some peace. The men, ably lead by a chief fire officer, resisted all attempts to evacuate the hall and frantically looked to turn the alarm off.

By my calculations it took 15 minutes to find an off switch. Jill Galloway will probably have a more accurate figure. (apolgies for the disturbance Jill)

It was a fantastic night and thanks are due to the organisers and helpers who spent ages washing the paper plates.
Can the new hall reproduce an event like this? The answer is ‘YES' despite all the sentiment in the above description, it is the people of our village who make things happen and will do again in our new hall