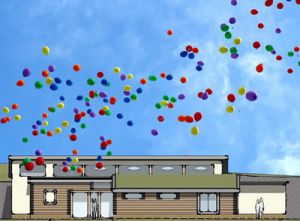 This is it...we've had the official news. After more than a year's work by many people in the village, the Big Lottery Fund has awarded us a grant of £470154 to build a new village hall. The village hall committee has signed up to the Lottery offer. That means construction must start by April 2013 at the latest.
Our timetable is to begin work in late February and to get the keys to the finished building in November 2013.
Plans of the new hall are on display in the village hall. It's mainly unchanged from the designs which we consulted the village about earlier in the year. The architects are Native Architects of York who specialise in buildings which are environmentally friendly. This is going to be a warm, airy building which will give us what we said we wanted and be inexpensive to run.
There's a huge amount still to do. There are plans to finalise, contractors to appoint, design details to sort out and planning conditions to meet. We are on with that now. We also have to raise some more money...which is what we come to next....

We got the money because lots of people worked to make the case. We had to prove that our village needed a new hall and that it would make a difference to the village. People helped by being on committees, deliver-ing notices, coming to events, raising money, respond-ing to questions and surveys. A big thanks for all that work and time to everyone who took part.