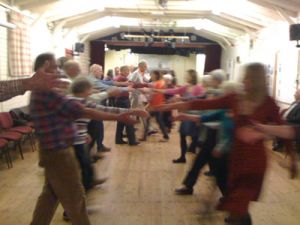 The Harvest Ho Down was a huge success this year raising over £600 for the Martin House Hospice.
The Village Hall assumed it's ageless appearance as tableclothed trestle tables were covered in traditional home cooking.

Observations on the food were tentatively made as some of the chefs were sitting in amongst us.  One near this author shamelessy promoted her own pudding to the detriment of others.  As an event organised by the church this was particularly uncharitable.

Dancing, or a near approximation, followed as Brian Watt patiently walked us through the steps. Strangers held hands and with fixed smiles looked desperately for their correct partner.  It was terrific! Particularly pleasing was the number of young children who were there, making it a complete intergenerational event.

A huge vote of thanks to all those who worked so hard to provide a night typical of many we have had in our Hall.

If anyone is not sure, the blur in the photograph is down to shaky hands rather than speed of movement.