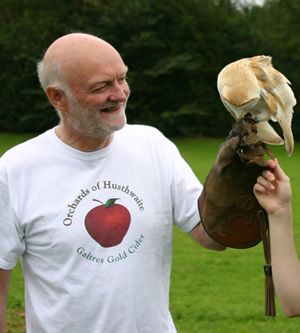 The third Apple Fest was held on Sunday the 17th of September. Despite the gloomy weather forecast, the rain held off until the last 15 minutes and another fantastic event was held./p>

The entrance to the fair was focussed on drinks. As it was an apple fair, the cider samples and the cider tasting competition have to be mentioned. Next was the Traditional Moroccan Apple Milk Shake stall where fresh “jus de pomme naturelle” was made to order. The tombola as ever proved a popular attraction.

Around the school field there were numerous activities including a number of stalls selling a range of wares from bric-a-brac to baking; a reptile stand where you could have a snake wind it’s way round your arm; face painting; a bouncy castle; a Bird of Prey display and theatre. One of the biggest crowds was when Wonder Phil Grainger kept the children and adults enthralled and amused with his show.

The music tent featured A Bit of a Gamble who were their usual entertaining selves and a number of people commented on enjoying the Brass Band.

As well as all this within the school there was a continuous supply of hot drinks, sandwiches and baking available.

Firstly and most importantly would like to thank everyone who contributed in any way to the event on Sunday 16th September. Thanks also to the visitors who turned up and gave their support despite the somewhat unfavourable weather conditions.

The concept of the “Applefest” was never intended as a fund raising exercise but an attempt to promote Community involvement, to bring residents of Husthwaite together socially and to forge links with the village Primary School giving priority to Children’s activities.

Orchards of Husthwaite, primarily Cameron Smith, have put in a lot of effort to co-ordinate this event and unfortunately this year a financial loss has been sustained which will be underwritten by the Orchards Project. It goes without saying that the event would not happen without a huge number of people supporting it such as the Village House Band.

For those who wish to know “Where has all the money gone?” the following breakdown should be self explanatory…….

The School did raise a total of £540 from their various activities on the day.

Once again, Thank You all!